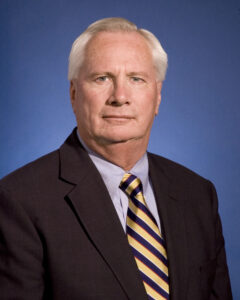 ​Jeffrey L. Hill was born in New Hartford, New York, on May 20, 1947 and, except for a brief period of time, when he resided in Syracuse, New York, has been a life long resident of the area.  Having attended secondary school in the New Hartford Central Schools, he went on to college at Syracuse University, receiving a Bachelor of Arts Degree in Political Science in June 1969.  He received his Juris Doctor Degree from the Syracuse University College of Law in May of 1974 and was admitted to the New York State Bar in 1975.

Following graduation from law school and completion of study for the bar exam, Jeffrey became an associate for the Syracuse, New York Firm of Lowery, Carrigan and Keough, where he continued practice until June 1977.  In January of 1976, while still practicing law with Lowery, Carrigan and Keough, he was appointed as a part time Assistant Counsel to the Speaker of the New York State Assembly by Speaker Stanley Steingut.  From June of 1977 through March of 1978, Jeffrey served as Law Secretary to Judge Thomas J. Lowery, Jr. of the New York State Court of Claims.  Starting in March of 1978 and continuing through January of 1988, Jeffrey served in a number of counsel positions of increasing responsibility in terms of substance and size of staff managed in the New York State Assembly, including Counsel to the Majority Conference, Home Rule Counsel, Parliamentarian and for the last six years, Counsel to Majority Leaders Daniel B. Walsh and James R. Tallon.

In January of 1988, Jeffrey joined one of the oldest and most prestigious Albany, New York, law firms of DeGraff, Foy, Holt-Harris & Mealey, as a partner, where he practiced law in the legislative area.  In January of 1993, Jeffrey, together with Thomas J. Gosdeck, another former partner of DeGraff, Foy and the governmental affairs firm of John W. Vandervort Consultants, Inc., formed a new lobbying firm known as Vandervort, Hill & Gosdeck.  At the same time Jeffrey and Thomas formed a new law firm called Hill and Gosdeck, with which they engaged in full time practice following the December 31, 1997, dissolution of Vandervort, Hill & Gosdeck.

Due to a client conflict involving clients of that firm, on January 1, 1998, Hill joined with Thomas J. Gosdeck in the practice of law and legislative representation in the firm of Hill & Gosdeck.

In addition to his lobbying and legal practices, Jeffrey is a former member of the Steering Committee of the Business Council of New York State, Inc.  He is currently a member of the University Club of Albany, as well as a member of their Board of Directors.

In the area of community service, Jeffrey is a former member of the Board of Directors of New Hartford Youth Hockey Association, Inc. and served as its president from 1989 through 1993.  Further, he has assisted the United Food and Commercial Workers District Union Local 1 in the organization and running of the highly successful “One Charity Golf Classic.”  He has been active in fundraising activities on behalf of the Miami Project to Cure Paralysis.  He also serves on the organization committee for the Speaker’s Cup golf tournament, The Assembly Minority Golf Outing and the Senate Democratic Golf Outing – all held annually.  He served as Commodore of the Awenke Yacht Club and is currently the Chair of its Board of Governors and has served as the Commodore of the Mohawk Hudson Council of Yacht Clubs, Inc.

Jeffrey is married to the former Barbara Ann Jones of Utica New York, and they have four children.  They reside in Loudonville, New York.